Elephants are able to survive in a variety of different locations because of the huge variety of food sources that they consume. Many people assume that elephants that are in the wild only live in the grasslands. While that is one of their main habitats, they can also be found in the desert of the Savannah, forest areas, where there are swamps, and everything in between.

They form emigrational paths that they continue to follow year after year. This allows them to take advantage of the foods that grow in various areas. The paths that they walk are clearly there just like a road and they are fascinating to see when you are looking at areas that don’t have any clear pathways other than these from the elephants as they roam around.

Today most of the elephants remaining in Africa live in National Parks. These areas have been put in place to help give them plenty of room to survive. They are also well protected in these locations to help the population count rise. However, this can be stressful for the elephants as they love the ability to freely roam. They also love to play and to bathe in water so they don’t mind traveling long distances to find it.

One of the reasons why elephants have been able to survive for so long in the wild has to do with their high level of intelligence. While they do have their natural habitat where they want to be, they also have the mentality to know when they have to move on and they have to adjust to new habitats in order to continue to survive.

They don’t have predators other than humans so when they do move to new habitats being able to find adequate supplies of food is the one thing that they have to worry about. If they can find it, then they will likely be able to thrive there.

One of the biggest threats to elephants in the wild is the continually destruction of their natural habitat. This gives them less room to roam in order to find adequate supplies of food. They can consume more than 50 tons of food per day so they need quite a selection of it to choose from. When they are limited to certain locations though they can completely wipe out the vegetation there. As a result it will be difficult for it to grow back. 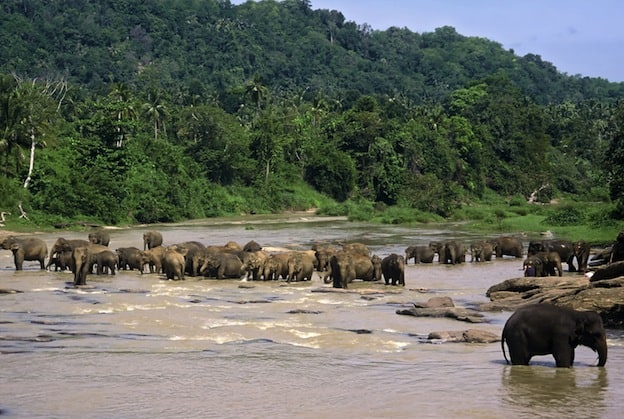 Herd of elephants in Sri Lanka

The habitat for elephants in captivity is a far cry from what they experience in the wild. Most zoos offer them a generous amount of room to roam but it is nothing like what they would have in the wild. Still, they have plenty of water and food so they don’t need to travel for those reasons. They are also offered plenty of toys so that they don’t become bored.

When they are in a circus setting they are living in even worse conditions. They are often chained up and forced to stand still in small cages. This can lead to a great deal of stress for elephants. They are instinctively driven to be able to move at their own leisure.