Elephants have a unique body design that makes it hard to confuse them with any other animal in the world. They are very large animals with an anatomy that is developed so that they have a very good chance of survival in their natural habitat. All of us are familiar with the trunk of an elephant. It is the most important part of the body for this animal. You will notice the end of it has some peculiar designs to it. These are used to help them pick up items.

There are more than 40,000 muscles found in a single elephant trunk. This is what gives it the flexibility and range of motion that elephants have with it. The trunk is very strong and they can even pull complete trees out of the ground with it. They have sharp teeth that allow them to tear various types of plants and then to chew them up. The trunk is also used for communication purposes and for smelling.

The tusks of an elephant are actually part of their teeth. They will continue to grow even after they are fully mature. The length of the tusks are often an indication as to the age of the elephant. Unfortunately it is due to the value of these ivory tusks that many elephants have been needlessly slaughtered. The tusks serve as a way to dig for water and to remove the bark from trees so that they can consume the pulp underneath it. Both sexes have tusks but the males are longer. One is usually longer than the other due to using one more than the other as a tool.

They have about 24 teeth but they tend to only use two or three of them at a time. This is why their teeth don’t wear out evenly. The teeth rotate though and grow from the back of the jaw. Then they move forward to replace other teeth. As an elephant gets older though they stop developing new ones. Then they only survive with what they have left. Should they wear out then the elephant will starve. 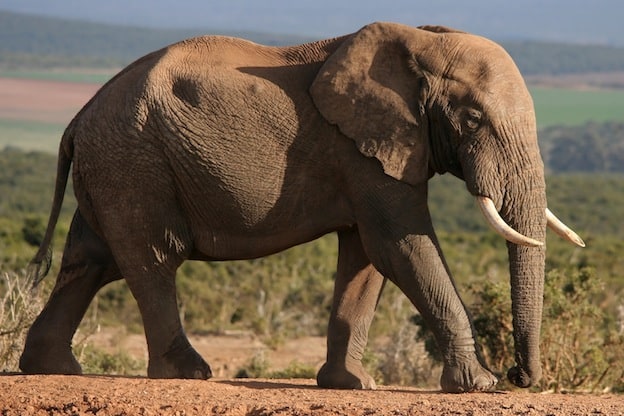 The skin of the elephant is extremely thick, and that offers them plenty of protection. Generally it will be about 1 inch thick. While it is hard to see, there are tiny hairs located all over the body on this skin. Their skin is sensitive to the sunlight which is why they are often seen tossing dirt or mud on it as a form of protection.

The design of the legs of an elephant all them to have plenty of traction. However, they aren’t designed to move very fast. An elephant can’t run like most four legged animals. Instead it can walk for hours and hours at a steady pace. Of course you do have to mention the extremely large ears of the elephant. They are constantly flapping as a way to help cool off the elephant and regulate body temperature.

As you can tell, there are quite a few unique elements of the anatomy of the elephant. This is why so many researchers continue to want to explore it in further detail. While some parts of the make up of an elephant may seem strange, they all come together to offer us a completely amazing animal that is comfortable in its own skin.