The African elephant is the largest of the two species left in the world. They have extremely large ears and both the males and the females grow tusks. They can be more than 12 feet tall and weight about 14,000 pounds. There are some sub species out there that are smaller with a height of about 9 feet and weighing approximately 7,500 pounds.

The majority of them live in the Savannah desert. Many of them also live in the thick forests. They stay in herds of about 12 to 20 and then they can break off into smaller groups. They will still stay in contact though and interact as a larger group. The males can be loners out there if they don’t want to be a part of a bachelor herd.

4×4 car near a big African Elephant in Botswana.

The females are extremely social and will spend their entire lives in the same group. They take very good care of their offspring, and all of the females jump in to help as well. They are excellent when it comes to communicating both verbally and non verbally. They also are very protective of each other.

They exhibit a variety of behaviors including being able to identify the bone remains of other elephants. They can express a variety of emotions including sorrow when they come across them.

African elephants can consume up to 600 pounds of food every single day. In order to do this they migrate in a pattern throughout their natural habitat. They consume plants, trees, bark, pulp, fruits, shrubs, and anything that is along the lines of vegetation. They aren’t able to digest more than 40% of what they take in which is why they have to continue eating so much. They can spend up to 12 hours a day just on eating. 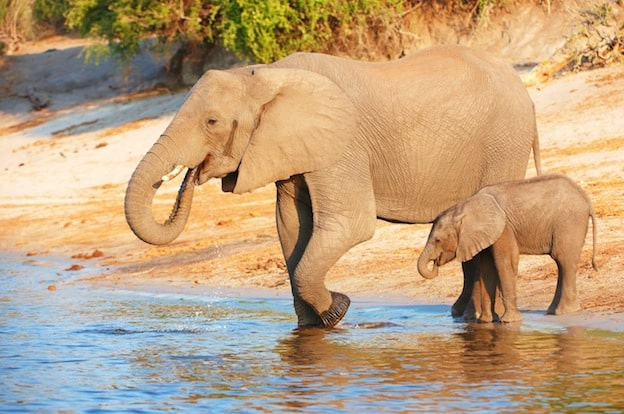 While elephants don’t have a given season for reproducing they are more likely to do so during the rainy periods of the year. From the date of conception it can be up to 22 months for the offspring to be born. This is an act that is well celebrated among the females in the herd. They will be cared for by the mother and other females until about 4 years of age.

The African elephants don’t have any natural predators, but keeping them safe from humans is a very difficult job. Even with lots of conservation efforts in place to protect them from being hunted and from their habitat being destroyed all of it continues. This makes it very difficult for them to increase in numbers.

There are many stories about interactions of humans and the African elephants. Some of them are very good and others are a nightmare. For the most part these are intelligent creatures that do get along well with humans. They are often used for working in the forests of Africa. They have been done to destroy villages in that area though due to the slaughter or poor treatment of some of their herd members.